On January 11th 2001, my husband Tony and I fulfilled a long-held dream of going to live and work in India, arriving in Mumbai at midnight. Sleepily juggling our way through the long lines, questions and organised chaos of customs and immigration, we finally stepped out into the night air and I was in awe.

Even at that time in the morning, there was a quality of sight, sound and smell which was unmistakable. It felt strange, yet deeply familiar as if I was coming home to a place I had always known and been longing to return to. My entire being seemed to be letting out a sigh of relief as if saying, “Finally, finally.”


We had prearranged for a minibus to take us to an ashram, which was a two and a half hour drive north of Mumbai. Bouncing along the highway in the musky darkness, we sat in silence taking it all in. As the sights and sounds of the night-time city fell further and further behind us, we headed off the main highway travelling down narrow lanes dissecting vast acres of fields, and past small villages with temples and oddly shaped shrines.
Pressing on, the driver cut more deeply into a valley taking narrow paths and bumpy twists and turns, until he eventually followed a long, sweeping bend and stopped with a jolt in front of the tall, serene, white domes of the ashram. Startled that we had finally arrived, I sat up with the intention of bringing all my senses to complete focus promising myself never to forget this moment. Though I had seen these compelling structures many times in photographs, to have them suddenly appear in front of me, was a sight to behold.
Gasping, I could immediately feel there was such stillness and profound peace emanating from every nuance and detail; it seemed as if the entire structure was breathing. Even in the darkness, the walls appeared to be moving and shimmering and sparkling with an other-worldly presence. Once more, I had the impression of being swept up into a memory of something long forgotten, but now being stirred to wakefulness.
Stepping off the bus at three thirty a.m. we also found ourselves in the midst of a compelling scene. It was ‘brahmamurti.’ In yogic texts, ‘brahmamurti’ is described as being the most auspicious time for meditation. This period falls between three and six a.m. During these hours, most people are sleeping, which means there is naturally less physical and mental noise, making meditation practices easier.
Outside the ashram, I was witnessing the truth of this profound stillness. Silent figures, with heads wrapped in shawls, were filing through a small door to the left of beautifully decorated, wide, pink lotus gates. Watching intently, I saw people removing their shoes, bowing to touch the step and then disappearing into the interior of the luminous, domed temple. From the doorway, incense was wafting out in huge plumes and hanging thickly in the night air before being drawn up into the atmosphere.
All at once, my entire senses were flooded with the fragrance, images and deep silence of brahmamurti. Taking everything in, I was being pulled into a familiar place of peace and contentment that was hard to define. My thoughts began slowing down until they disappeared entirely, leaving me standing in a quality of emptiness and fullness that I had simultaneously always known and at the same time, had always been searching for. This ‘place’ felt completely natural and totally right. It was like being submerged in and supported by a vast ocean.
It felt like home.......
Excerpt from: An Awakened Life - A Journey of Transformation
Posted by JULIE HOYLE at 3:03 AM 14 comments: Links to this post 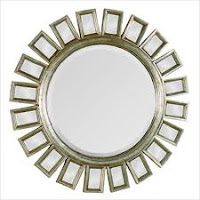 A local artist asked friends to select a cutting tool which represented a painful experience. However, though I searched, I was unable to find anything.

I realized why. Many fantasize about going to an enlightened teacher, imagining that he or she will dispense illumination. It isn't like that. An authentic teacher forces a seeker to own the darkness within and withdraw projections.

The greatest pain in my life has been acknowledging that I am the one creating the depression, the anger, the frustration. This is why I couldn't find a knife.

Instead I found a mirror.